COLLECTABLES: HAVE SOME YOU WANT TO SELL or TRADE? I WOULD BE INTERESTED TO BUY OR POSSIBLY TRADE!   You can contact me here>>>   https://forevernumerology.com/contact/

This is my part time hobby page. As a child in the early 1950’s I started to collect and play with these miniature race cars. I have kept some for all of these years and have a nostalgic attachment to them and to those times. The decade of the 1950’s was one of the most successful, innovative and popular times in international and Indy race history.

This page is for exchange of information with those who might also share an interest in these miniatures of that time. They were manufactured by Empire Plastic Co. in the late 1940’s then 1950’s and into the 1960’s, and sold under the Empire (Caldwell) label. They are sometimes mis-identifed as Reliable, F & F, Mohawk or Lido toys.  It would appear that they were offered in Kellogg’s cereal boxes (especially in the UK) back in their day. 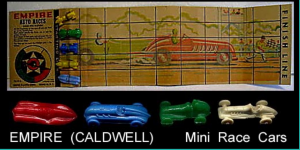 Younger generations are now buying  memorabilia  from all times and periods of history with a lot of attention upon the 1950’s and 1960’s generation. Old race fans and people who were a part of the scene back then are picking up pieces from that time, making them an increasingly more attractive item to collectors.

These are the quality hard plastic scale models that are about 1 3/4 inches to 2 inches long (approximately 4cm to 5cm). They are the highly detailed models with molded driver and tires, and are not to be confused with similar softer less detailed plastic pieces that were sold in gum machines and mass produced.

I bought my earliest pieces from the Ben Franklin 5 and 10 cent store in my home town at the price of two for one cents (penny) !! That would have been approximately 1951 to 1954 when I first started. Over the years I have come across some more to add to my collection.

If you have accurate knowledge about their origin, it would be fun to have that information. If you should have some you would let go, I would be interested to discuss acquiring them from you. To contact me use the website mailing address:  support@forevernumerology.com

I have tried to match the miniatures to real race cars from the 1940’s and 1950’s. They do not seem to be a perfect match, but very similar to certain cars from that era. There are 5 distinctly different miniature vehicles. Below are the match ups. Click on image to enlarge. 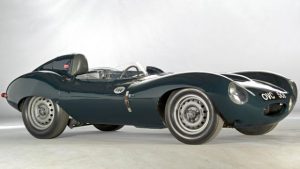 The above miniature appears to be close to a Jaguar D type replication. 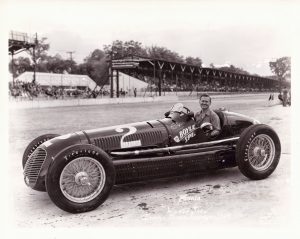 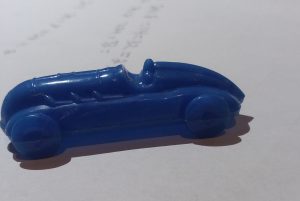 This miniature above comes pretty close to replicating the old Maserati chassis from that era. 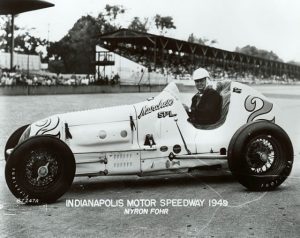 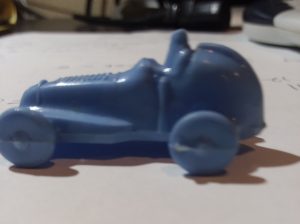 The above miniature appears very similar to the Marchese/Offenhauser. 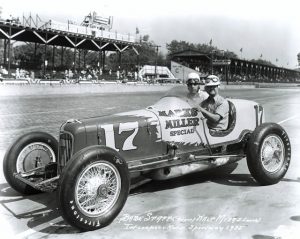 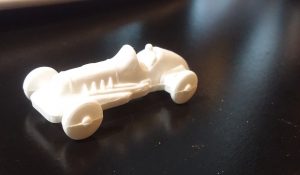 This one comes very close to replicating the Miller chassis series. 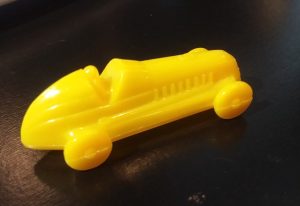 And finally this miniature comes very close to replicating the Kurtis Midget.

This image shows more clearly the exquisite detail for such small miniatures. Click on image to enlarge. 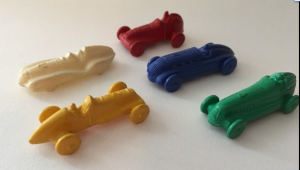 Any additional accurate information that you would like to add regarding the cars and miniatures would be appreciated. Below are a few of my little ones. Click on image to enlarge. 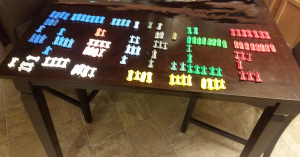 And don’t forget the support group of utility trucks, tow trucks, delivery trucks that bring the concessions, office supplies and parts for the cars, fire chief and fire trucks along with the fuel truck and dump truck that puts new asphalt on the track. Click on image to enlarge. 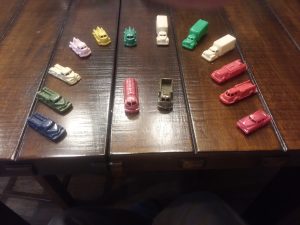 When  collecting the race cars I often have to purchase many other pieces to get the few race cars. Here are a variety of  cool 1950’s collectables that I would like to sell. They make great gifts, reunion momentos, cake toppers, table toppers and , obviously, collection 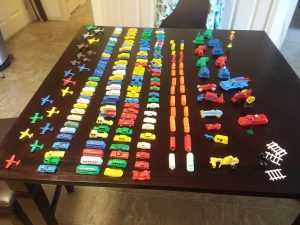 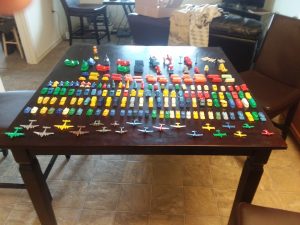