You are here: Home / Celebrities / The Numerology of Ben Affleck and Ana de Armas

Ben Affleck and Ana de Armas form a Hollywood romance that has caught the attention of fandom and heated the hearts of the lonely and looking as they watch this relationship develop. There is something in the human heart that seems to long for lasting and true love, and perhaps this one has that potential. The numerology of this relationship is quite encouraging; suggesting one of substance, mutual interests and aspects indicating it may beat the trail of failed Hollywood relationships and last. The year 2021 stands out as one in which we just might hear of a greater commitment made to each other in their relationship.
Everyone loves a lover, and Hollywood especially since it creates publicity and keeps the fans filled with things to talk about, fantasize and can help at the box office. More often people just like to follow the romance of two in love and wish for the same in their own life. Since Hollywood makes everything bigger than life, people can watch a couple of stars that stimulates dreams of a relationship that is perfect, fulfilling and forever. Let’s take a further look at Ben and Ana.

Here are their charts: 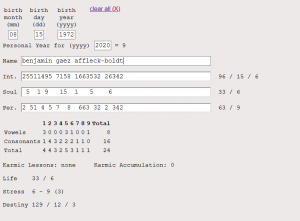 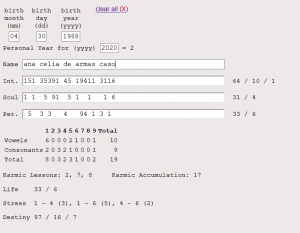 As a sort of standard for a good relationship from a numerology point of view, you want charts that are similar, but different enough to stimulate growth and avoid becoming overindulgent in each other. The key to any great relationship is compatibility, similar interests and a general combined outlook toward life and its goals. One thing that stands out immediately is that both share the master numbers 33. This can add to the allure and togetherness or add to the stress, drama and undercurrents that may arise.

It is well known that Ben is an Adult Child of Alcoholism. That is, one who has grown up in a family where alcohol was a problem for one or both parents. That also indicates a tendency toward codependency and dysfunction within the family and his personal growth. While less is known of Ana’s childhood, it is likely that dark corners and hidden issues linger in her past even though she describes her childhood briefly as “happy”. Like attracts like, and her numbers suggest a potential to gloss over troublesome aspects of her early life.

The 33 becomes a 6 which is the number of family, caring, service to others, relationships and health to mention a few. With the 33 there is a more global rather than personal quality added to the realm of service and compassion. There is a clear suggestion of karma that brings them back together, and together they may very well become involved in some form of politics or public platform. That is, if his past indulgences have not compromised him as with so many Hollywood biggies.

This is a woman with a mission and purpose beyond being together with someone, so he is going to have to be willing to give her space for her own ambitions without becoming petty or controlling. He can be needy, and although she is quite willing to be supportive, most likely she is not going to let him make her a martyr for his cause. This is a lady with brains, as well as, charm. It can be her wisdom that aids in guiding them to their highest collective efforts.

Their combined charts encourage caring, communication and cuddling. If they grow beyond just being a twosome, there is much they could give to the world. This is a high powered couple who could be instrumental in lifting the standards and quality of the entertainment world. And, beyond that, the quality of living for all of humanity.